When run, a panel appears containing a list of currently open files (excluding the current file). The content inside the selection will be copied to the end of the file selected from the panel. Note that the command will not be invoked if the selection is empty. 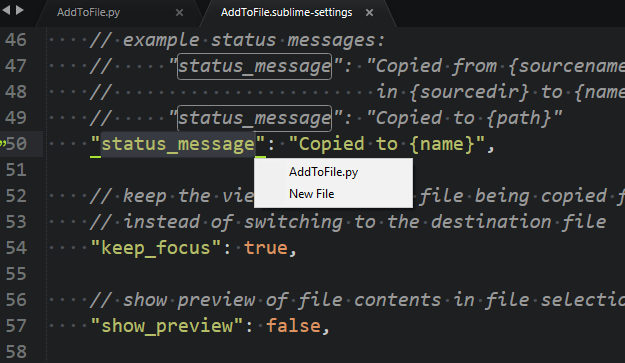 Edit the AddToFile.sublime-settings to configure this plugin. Open through Preferences --> Package Settings --> AddToFile --> Settings - User or the command palette ↓

1: This will not work if add_to_suggest_new_file is set to true as this adds another element to the file list. Even if there is no other view open and New File is the only item in the list, the panel will still open to ensure that a new file isn't accidentally created. ↑

2: If there are two files called AddToFile.py in different directories, the file selection panel will display AddToFile.py twice if this setting is set to false. However, the order that appears in the selection panel is the order of the view tabs from left to right which means the files could be distinguished by looking at which one's view tab is furthest left/right. ↑

3: Can include {name}, {path}, {dir}, {sourcename}, {sourcepath} and {sourcedir} which will be replaced with their corresponding values:

4: keep_focus must be set to false to allow the view to switch. ↑

5: File previews will not be shown and show_preview setting will be ignored ↑

The following commands are available via the view's context menu

The following describe the default key bindings associated with AddToFile

AddToFile can be installed manually: 1. Download the .zip file or browse to the latest release 2. Unzip the .zip file 3. Rename to AddToFile 4. Move to the Packages directory which can be opened through Preferences --> Browse Packages...