This package allows you to change between open windows in Sublime Text using a prompt. It is useful if you have a lot of windows open with different projects in them and you want to switch without having to press command ~ over and over again.

Another option is running the following command (this is the OS X version):

This plugin depends on wmctrl being installed on your system. On Debian-based operating systems (such as Ubuntu), you can get it using apt-get install wmctrl.

The default keybinding is

After that you will see a menu that looks like this containing all your open windows in Sublime Text: 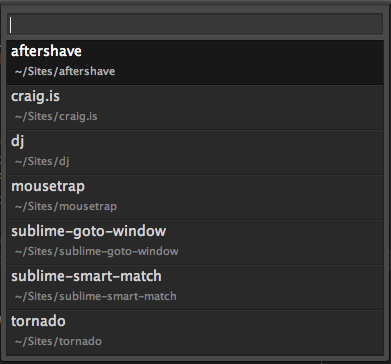 Select an item and that's it!

There is a bug that prevents this from actually working natively using Sublime Text APIs. See https://github.com/SublimeTextIssues/Core/issues/444 for more information.

I haven't been able to test it on Windows, but there are workarounds in place that seem to work on OS X and Linux.