A plugin for Sublime Text 2 and 3, which visualises PHP code coverage data in the editor.

A plugin for Sublime Text 2, which visualises PHP code coverage data in the editor. Test coverage data is parsed from a Clover coverage file, and displayed visually in the margin, with a summary in the status bar. 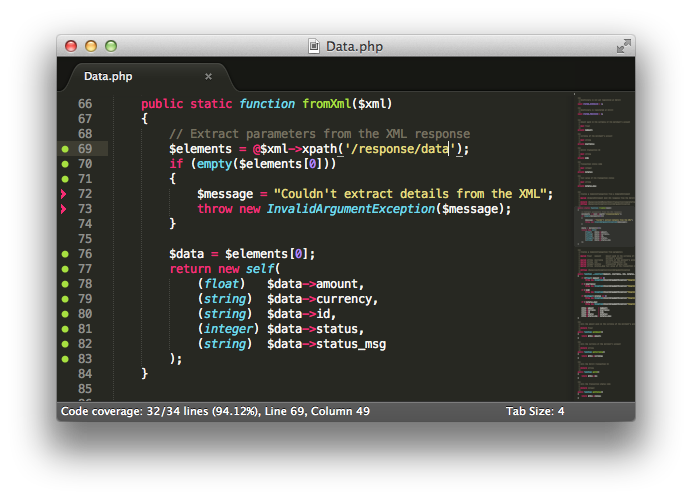 Green (dot) lines are covered by at least one test, red (arrow) lines are not covered, and non-annotated lines aren't executable, so are not counted in code coverage data).

Before you start, the requirements are:

The simplest way to install the plugin is using Package Control. Go to Preferences > Package Control > Install Package, type in “PHP Coverage”, and hit Enter. You're done! Check out the configuration section.

If you're thinking of hacking on or contributing to the plugin, then it's probably best to install the plugin manually. You'll want to get this Git repository into your Sublime Text Packages folder. That will be located in a variety of locations depending on your operating system and Sublime Text version.

You can do this in one go using Git:

SublimePHPCoverage.sublime-settings contains a variety of configuration options. These can all be overridden individually in the user configuration file.

Additionally, settings may be set on a per-project basis in the Sublime project file (e.g. myProject.sublime-project). This is especially useful for setting the path to the Clover report, as it may differ for each project.

When set to true, the plugin will provide detailed diagnostic logging to the Sublime console (accessible via Ctrl + `).

If you're experiencing a reproducible issue with the plugin, please enable this option and provide as much of this logging data as possible in a bug report.

If set to true (the default), when a PHP file is open in Sublime, the plugin will spawn a “watcher” thread which monitors the relevant coverage file for any changes. If the watcher detects any changes to the coverage file, it will trigger an update of the displayed coverage data in the editor.

Although the watcher thread uses polling to watch the file, it shouldn't cause a significant amount of load while running in most cases. However, if it does, you can try disabling the functionality using this configuration option (and simply update the coverage data manually).

This option (together with exclude, documented below) controls what filenames will be considered PHP files for the purposes of showing the coverage data in the editor. The default behaviour is to only enable the plugin's functionality for files which end with .php.

It should be an array of strings, where each of the strings contains a regular expression pattern. If any of the patterns in the array match the filename, then the file will be included – unless it also is excluded by the exclude option below.

This option (together with include, documented above) controls what filenames will be considered PHP files for the purposes of showing the coverage data in the editor. The default behaviour is to disable the plugin's functionality for files that reside in a folder named either test or tests (the rationale is that your PHPUnit tests may reside in a folder with one of these names, and they won't have any code coverage data of their own).

It should be an array of strings, where each of the strings contains a regular expression pattern. If any of the patterns in the array match the filename, then the file will be excluded. This will force the plugin to be disabled for that file, regardless of whether it was included by the include option above.

PHPUnit should be configured to output code coverage data in Clover format. The coverage data should be stored at the location referenced by the report_path option (which defaults to build/logs/clover.xml).

This can be done with PHPUnit's command-line arguments:

This plugin previously featured a command which would execute PHPUnit, generating the code coverage report automatically. However, this functionality has been removed as of v0.2, as the same behaviour can now be achieved using Sublime Text's built-in Build Systems feature.

To set this up, add something similar to the following section to your Sublime project file (e.g. myProject.sublime-project):

There will then be a new “PHPUnit” option in the Tools > Build System menu. By selecting this, you can then use ⌘B to run your PHPUnit tests.

If there are issues with the automatic watch_report setting, it can be disabled. In that case, the code coverage shown in the editor can be manually refreshed. To do so, go to Tools > PHP Coverage > Update Current File, or press ⌘⇧C.

Check that the code coverage file is present, and in the correct location (as referenced by the report_path setting).

Check also that the code coverage file has a <file> element for the file in question.

Please submit any further problems you might run into as GitHub issues.

I'd be interested to know about any changes people are making, and any contributions are most welcome. Here's a couple of guidelines to try and help the project stay at its best.