TabToSpaceConverter is a Sublime Text plugin that converts tab characters in a file to spaces and applies your new tab width setting to it; while preserving tab based inline alignments.

Let's say you have a file that uses hard tabs for indendation and for inline alignment:

And the above file is created with tab_size = 8 setting, so the inline alignment only works when the tab_size is 8.

And then you want to adapt the file to a different styleguide, which uses 4 spaces for indentation. When you open the file with the new settings, you will see:

To apply the new styleguide to the file, you would normally use the Sublime Text menu in the status bar (Convert Indentation to Spaces): 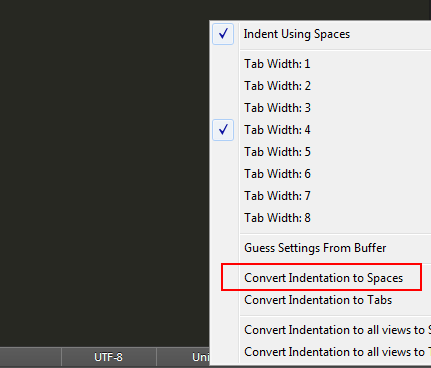 Which would give you the below result, breaking the inline alignment:

Use this plugin and get the below result, as you would expect:

You can install the plugin via:

The plugin is developed for Sublime Text 3 and above. It's not tested on Sublime Text 2; however it may still work there, so you can give it a try if you have to.

This plugin is meant to be used with a keybinding. It's not defined by default, because it needs some configuration. You should click the Preferences > Key Bindings menu and then add a keybinding like this:

You don't have to provide your current tab_size setting to the plugin, just set it in the Sublime Text and the plugin will read it.

Other plugins that are similar to this one (they don't do the same task though):

TabToSpaceConverter is released under the MIT License.