Ceer is a C and C++ plugin for Sublime Text that provides code intelligence across source files by continuously parsing and indexing a project. Because Ceer is actually starting to compiling the code, but stopping before code generation, it reflects the true state and structure of the program.

Ceer is in an early prototype phase, and we are working hard to improve stability, scalability, and portability. Currently, Ceer is only available on OSX, support for other major platforms is in the works. I haven't developed a good framework for testing yet, so any feedback is greatly appreciated!

Right clicking any reference to a method, field, class, etc. and selecting the Open Definition command will jump to the definition of that reference, even if it is defined in another source file. Note that in C or C++ a definition is not the same as a declaration. A declaration must be present in each file where there is a reference, while there must only be a single definition across all source files.

The main.cpp file contains a call to Foo's method some_method, which is declared in main.cpp by including Foo.h, and defined in Foo.cpp. 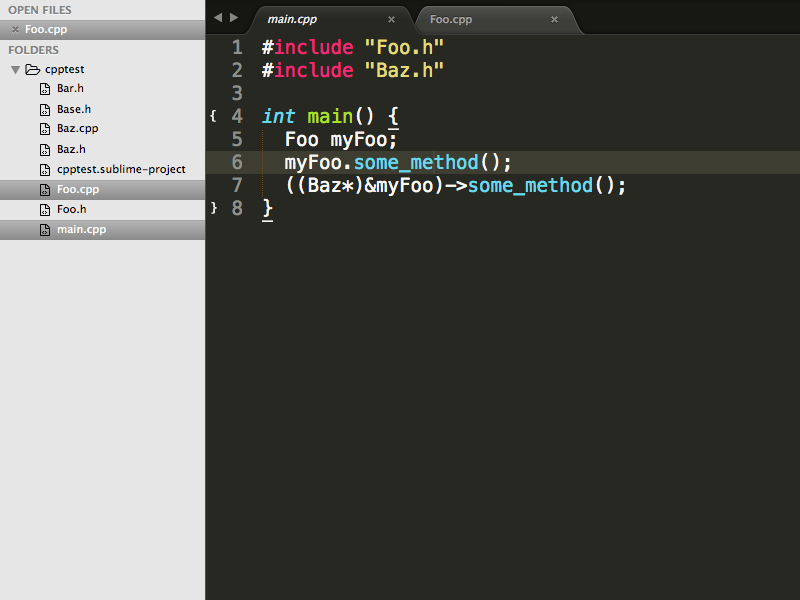 Right click with the cursor anywhere in on some_method to call Open Definition. 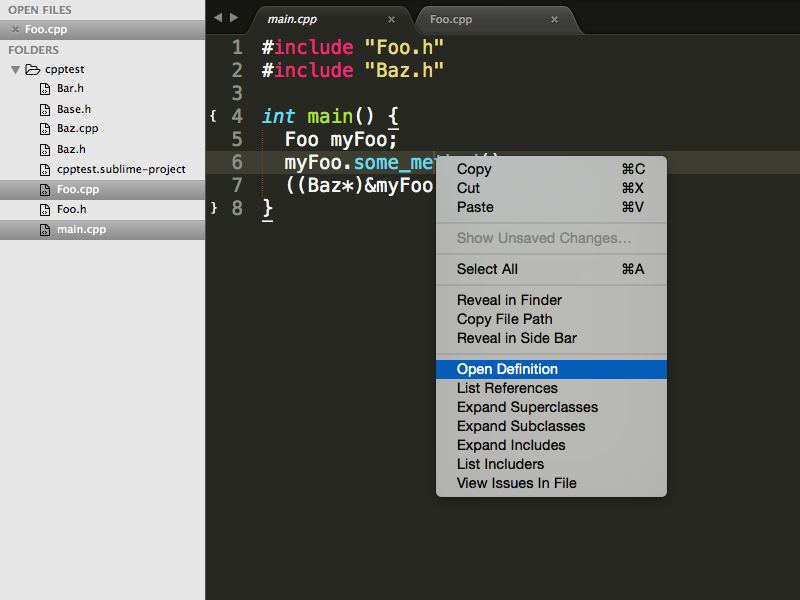 Open Definition will open Foo.cpp and highlight the some_method definition. 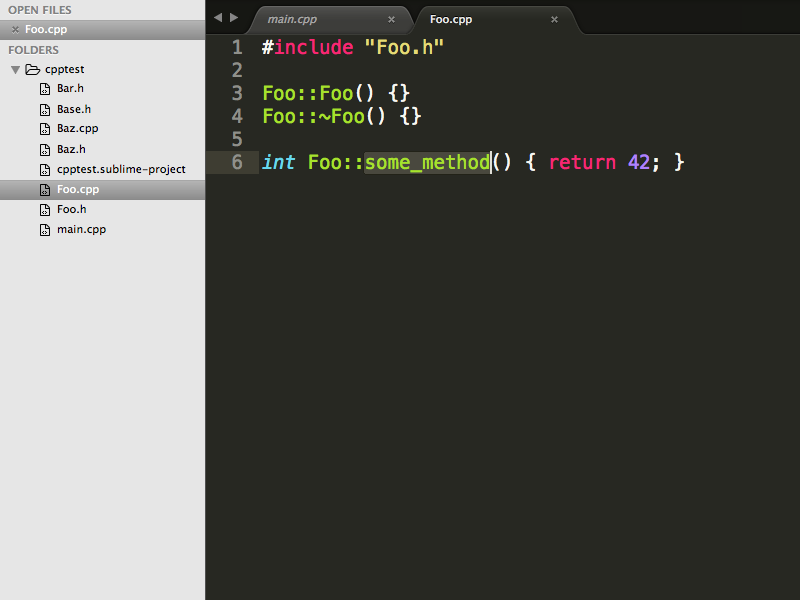 The List References command can be called on any definition or reference, and will list all references in a menu. Highlighting a reference will navigate to its location in the project. 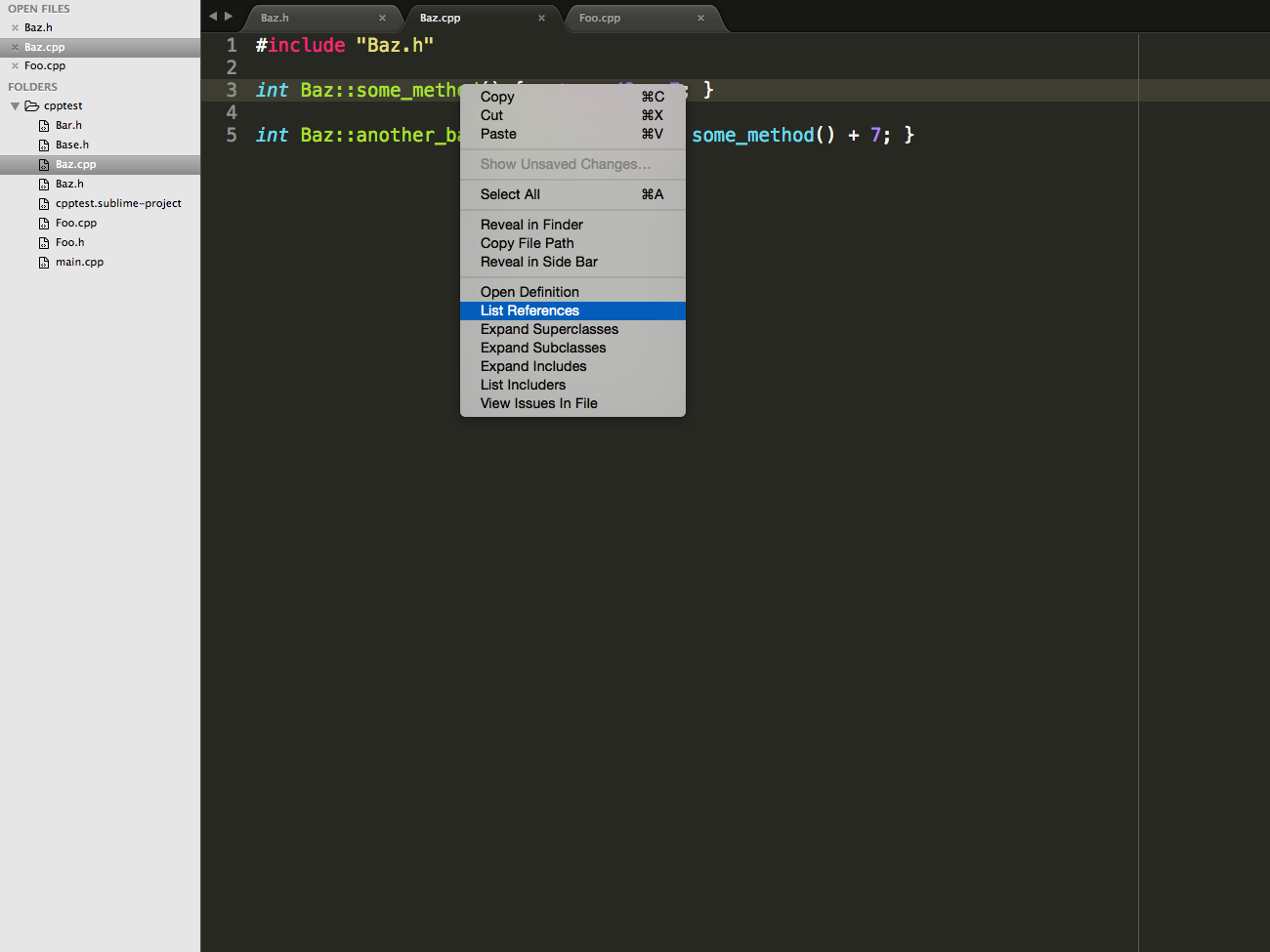 The first reference found is in main.cpp. Here we can see that Ceer is able to infer the compile-time type of the expression ((Baz*)&myFoo). In fact, it should be able to perform type inference identical to a compiler for any valid expression. 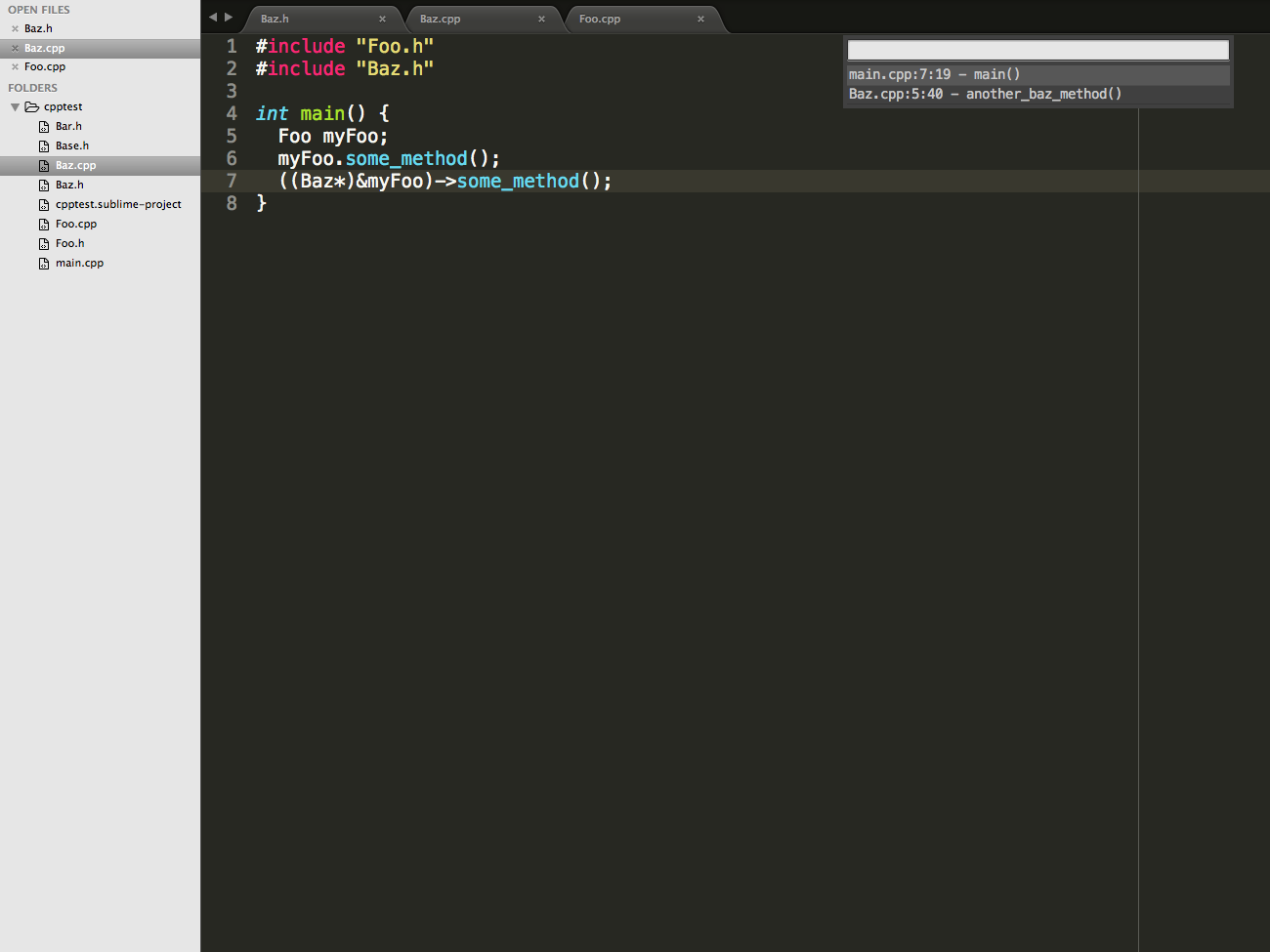 The second reference found is in Baz's method another_baz_method. 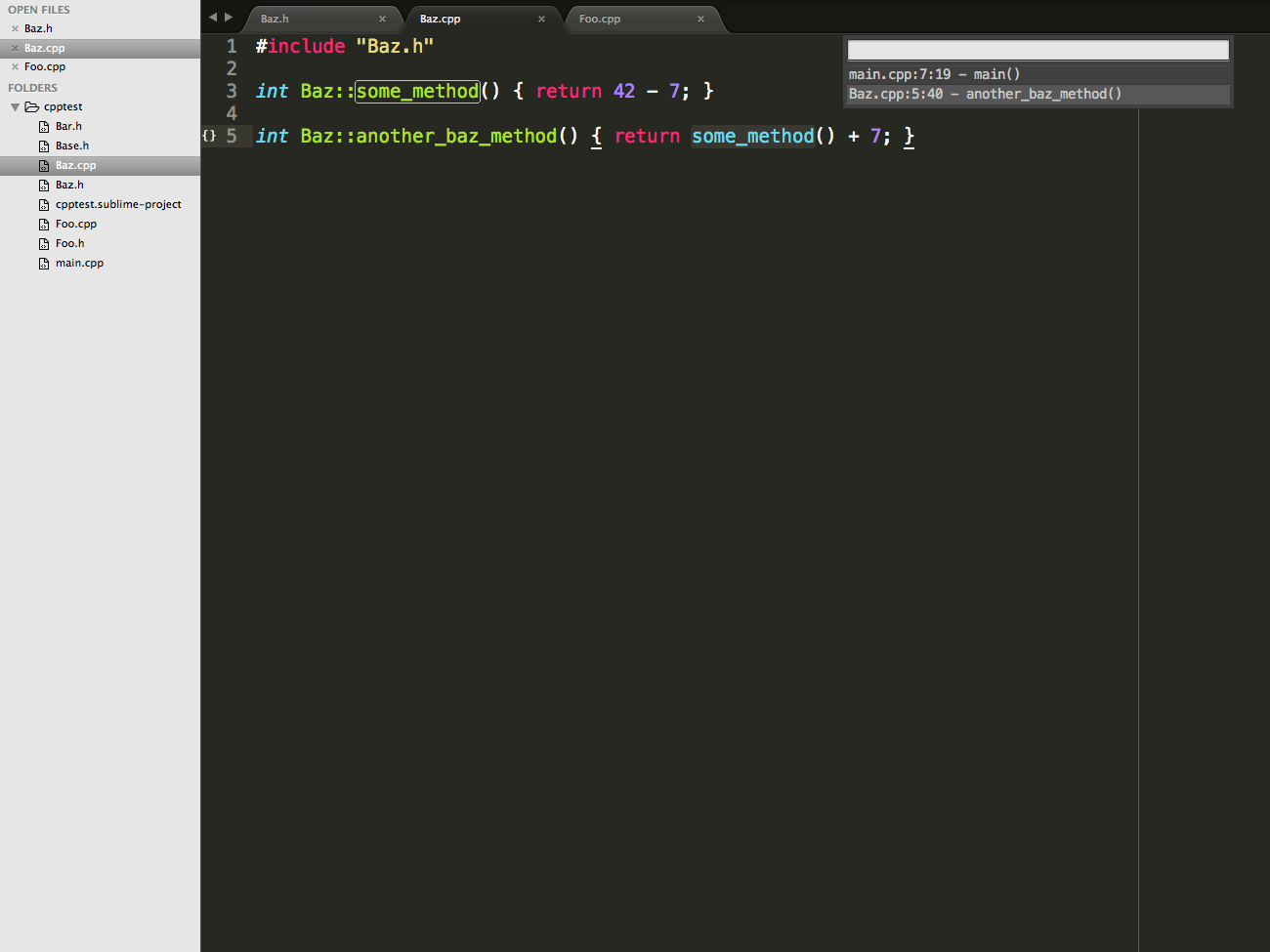 The Expand Superclasses command can be called on any definition or reference for a C++ class, and displays inheritance hierarchy of the class in a menu. Foo inherits from Base, which doesn't inherit from any other class. 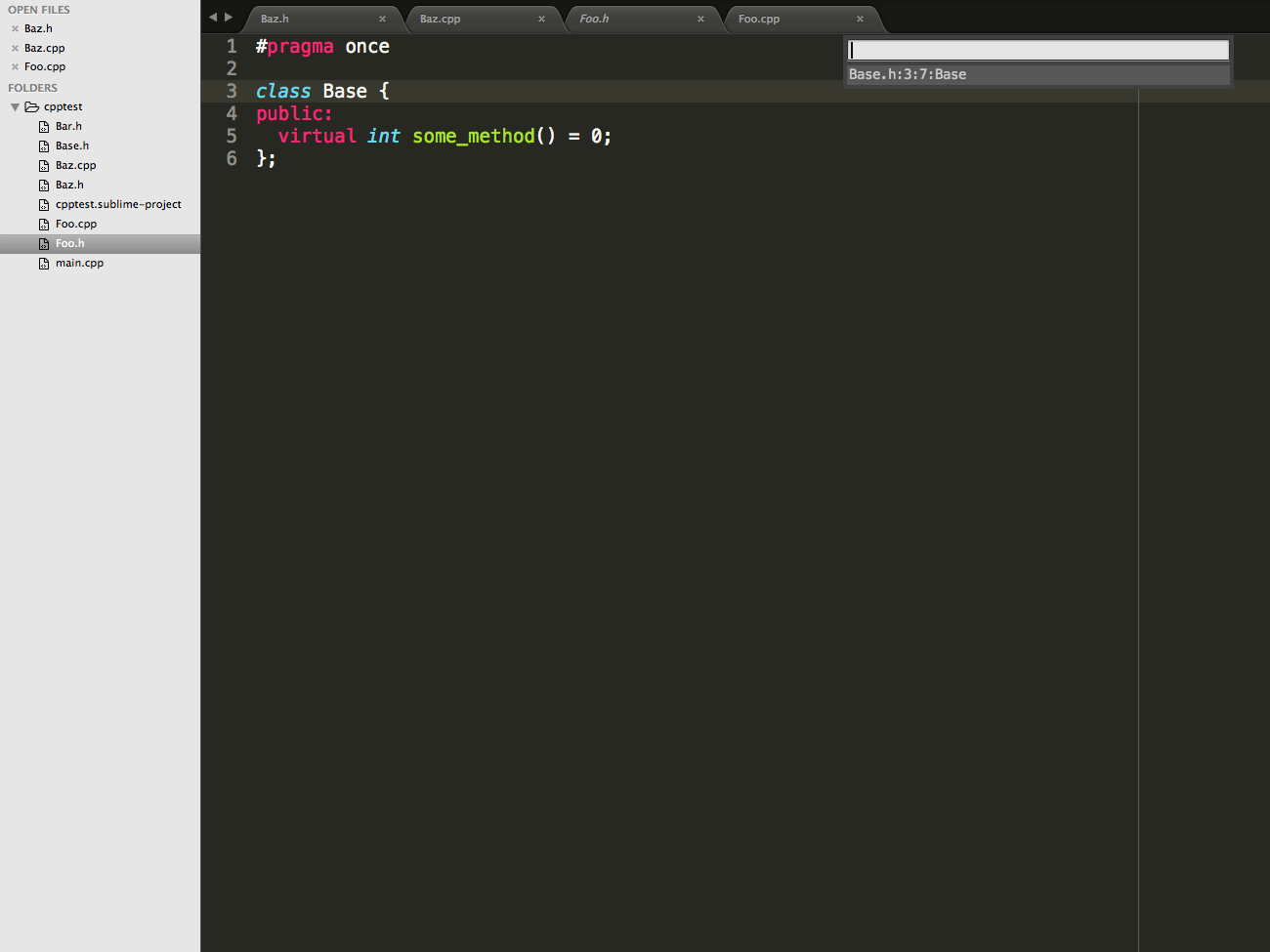 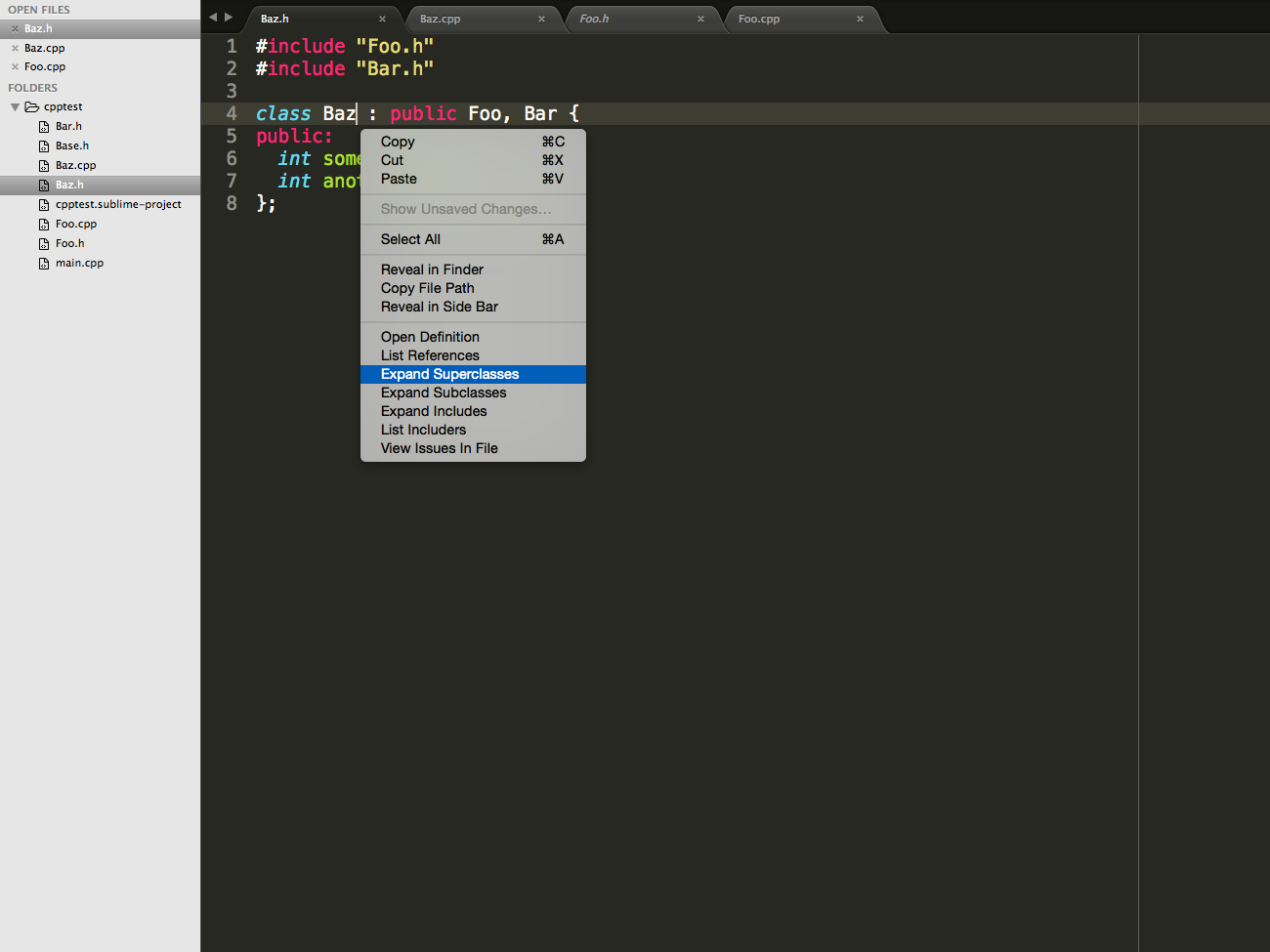 Baz inherits directly from both Foo and Bar, both of which inherit from Base. Note that in the menu, the superclasses are displayed in breath first search order, and are indented by their level in the inheritance hierarchy. 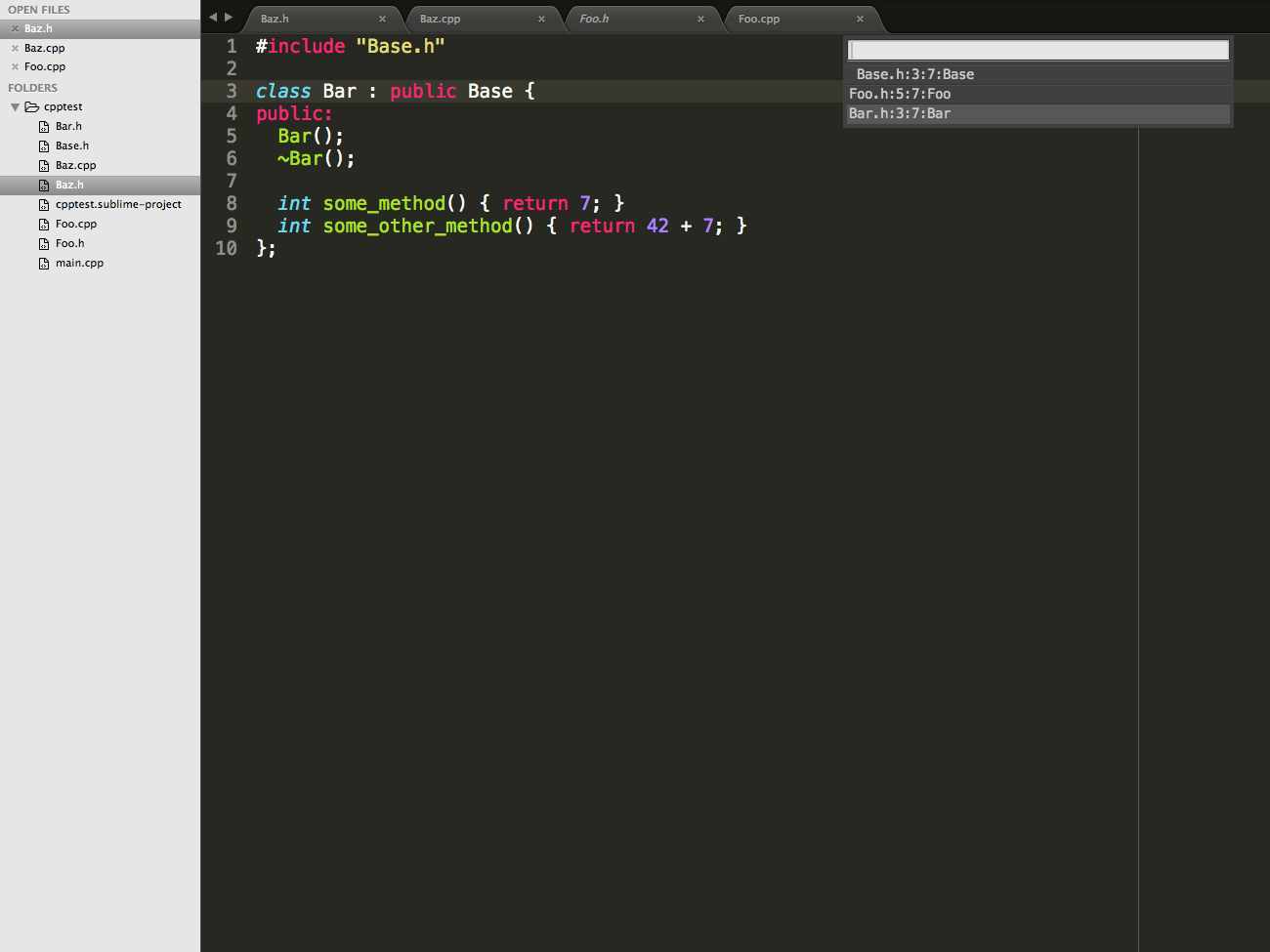 Call Expand Subclasses on Base. 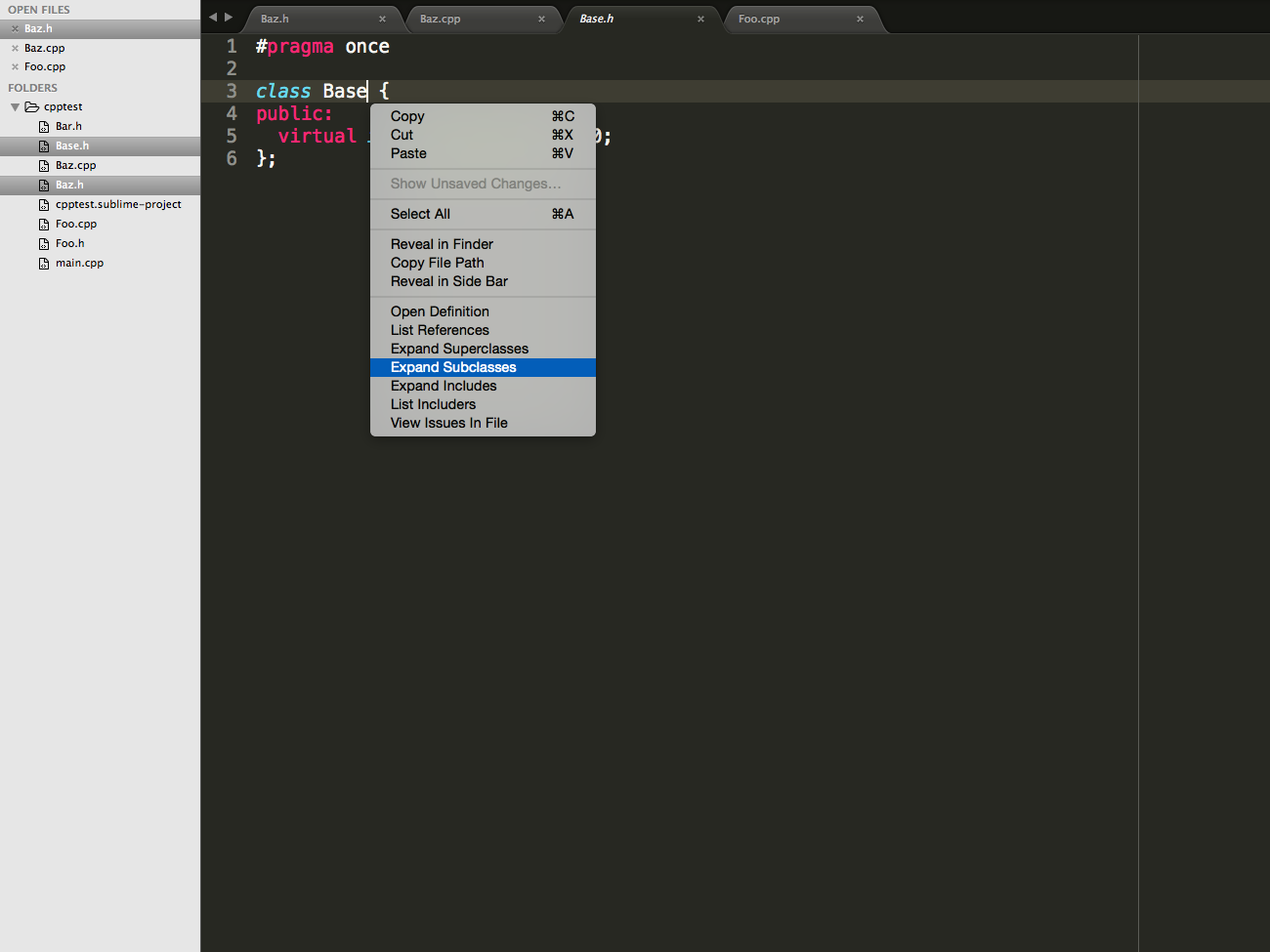 This diagram looks similar to when we called Expand Superclasses on Baz, but is reversed, because we are looking from the top of the inheritance hierarchy down, instead of from the bottom up.

Right clicking anywhere in a file and selecting the Expand Includes command will show all the files that file is including, whether directly or indirectly. The includes are ordered by depth first search, and indented based on how indirect the inclusion is.

Call Expand Include on Baz.h. 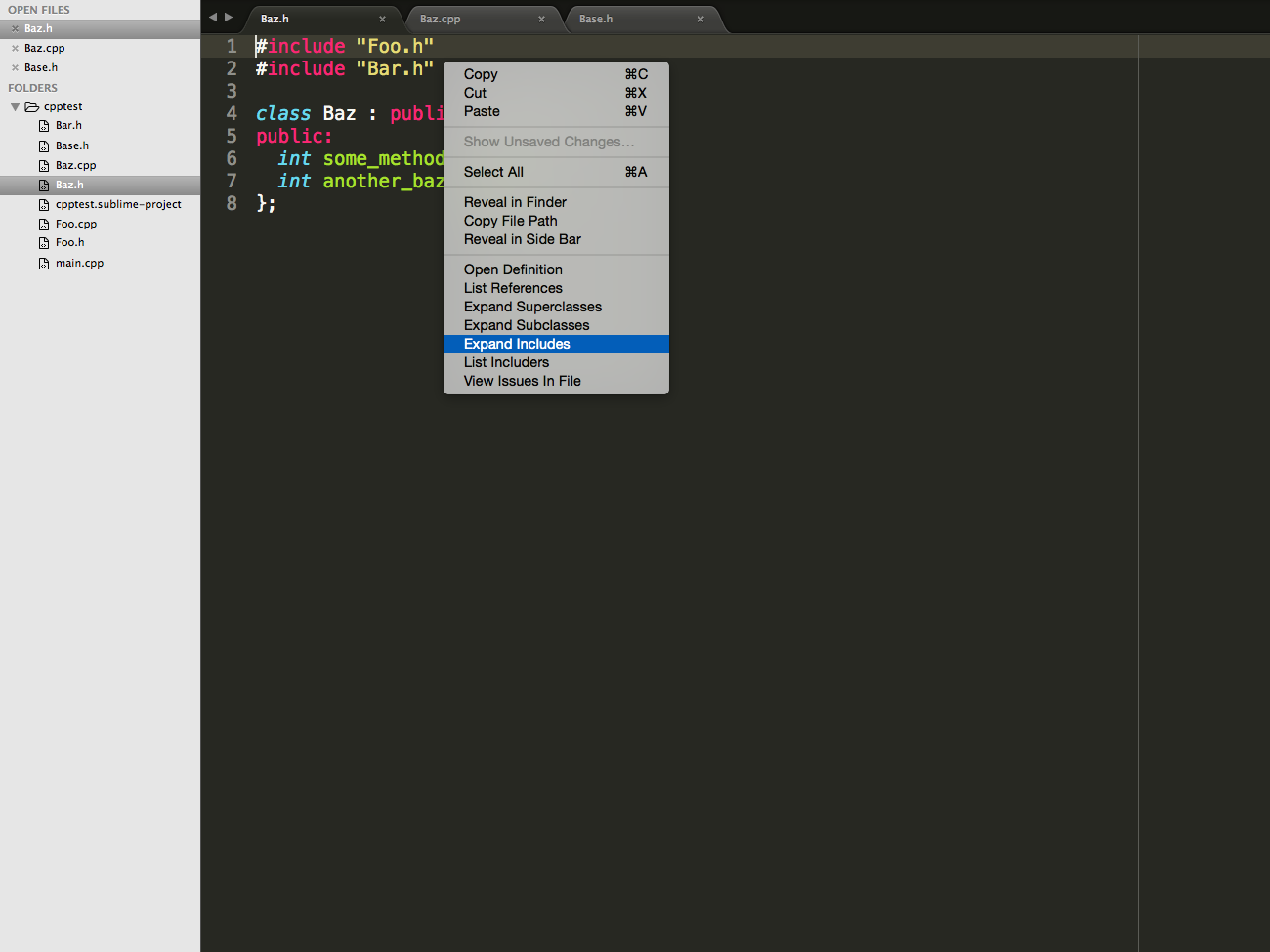 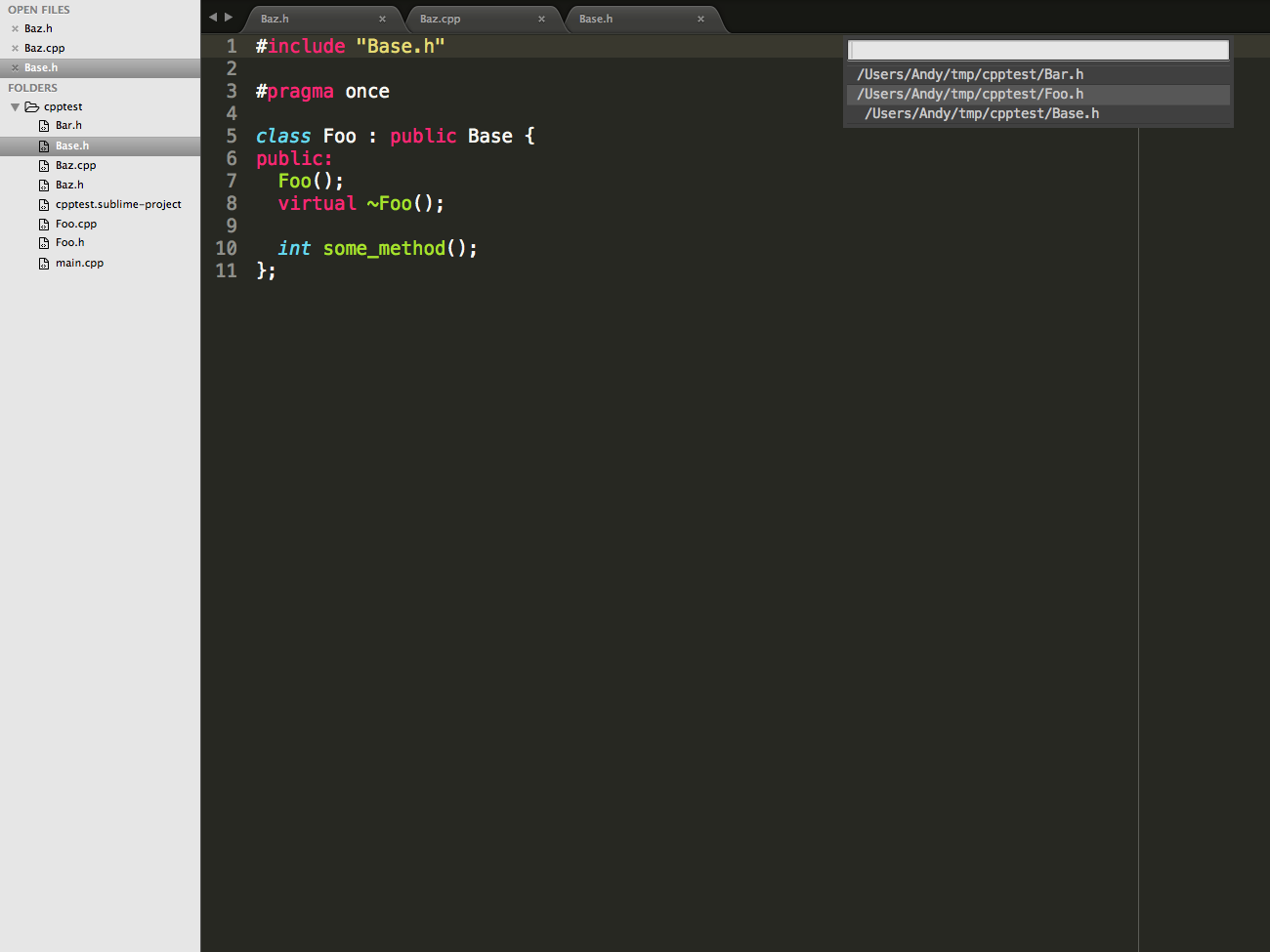 The List Includers displays a menu of all the files that are including the file the command is called on. Similarly to the Expand Includes command, the files are ordered by depth first search, and indented based on indirectness. 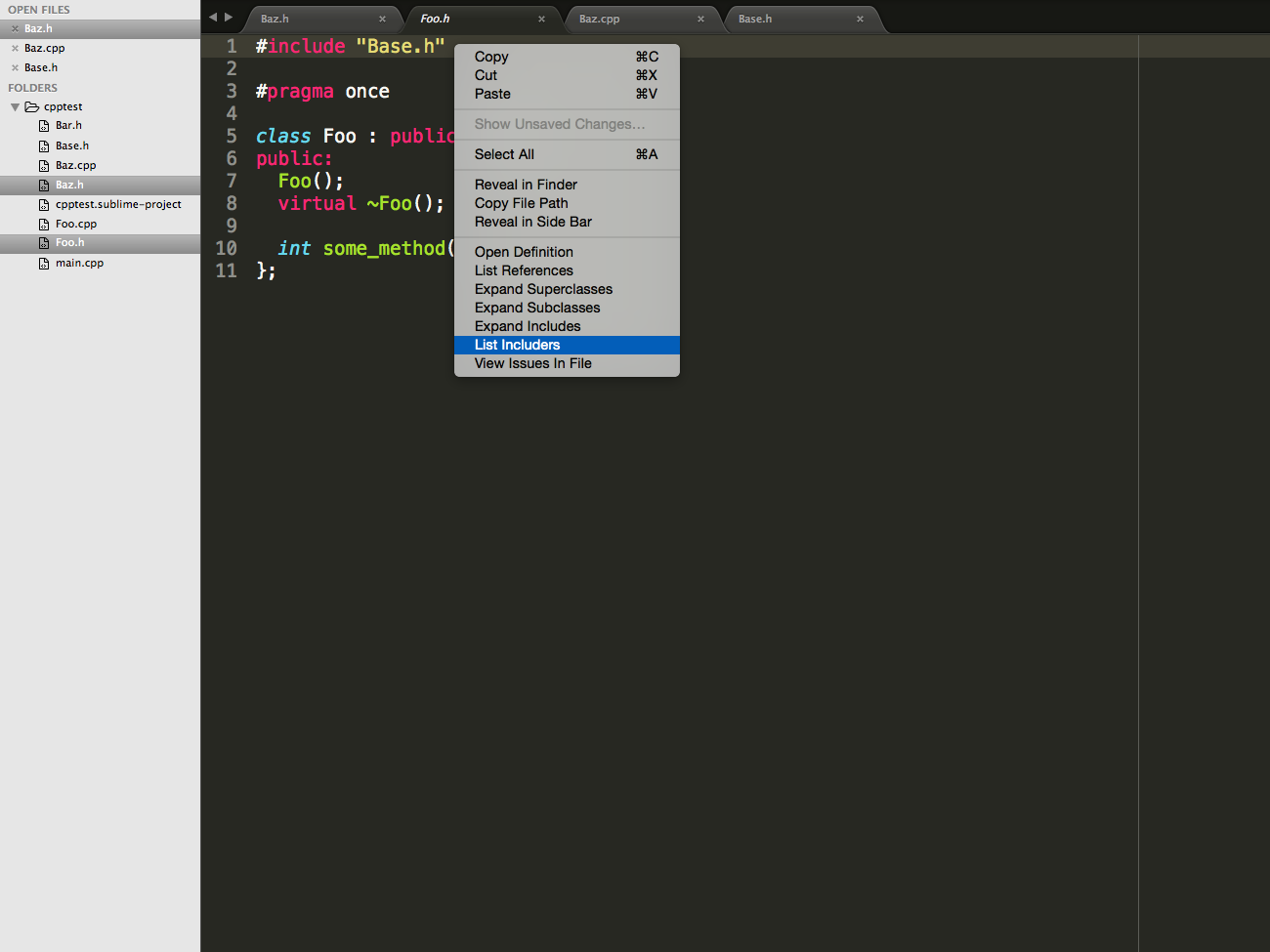 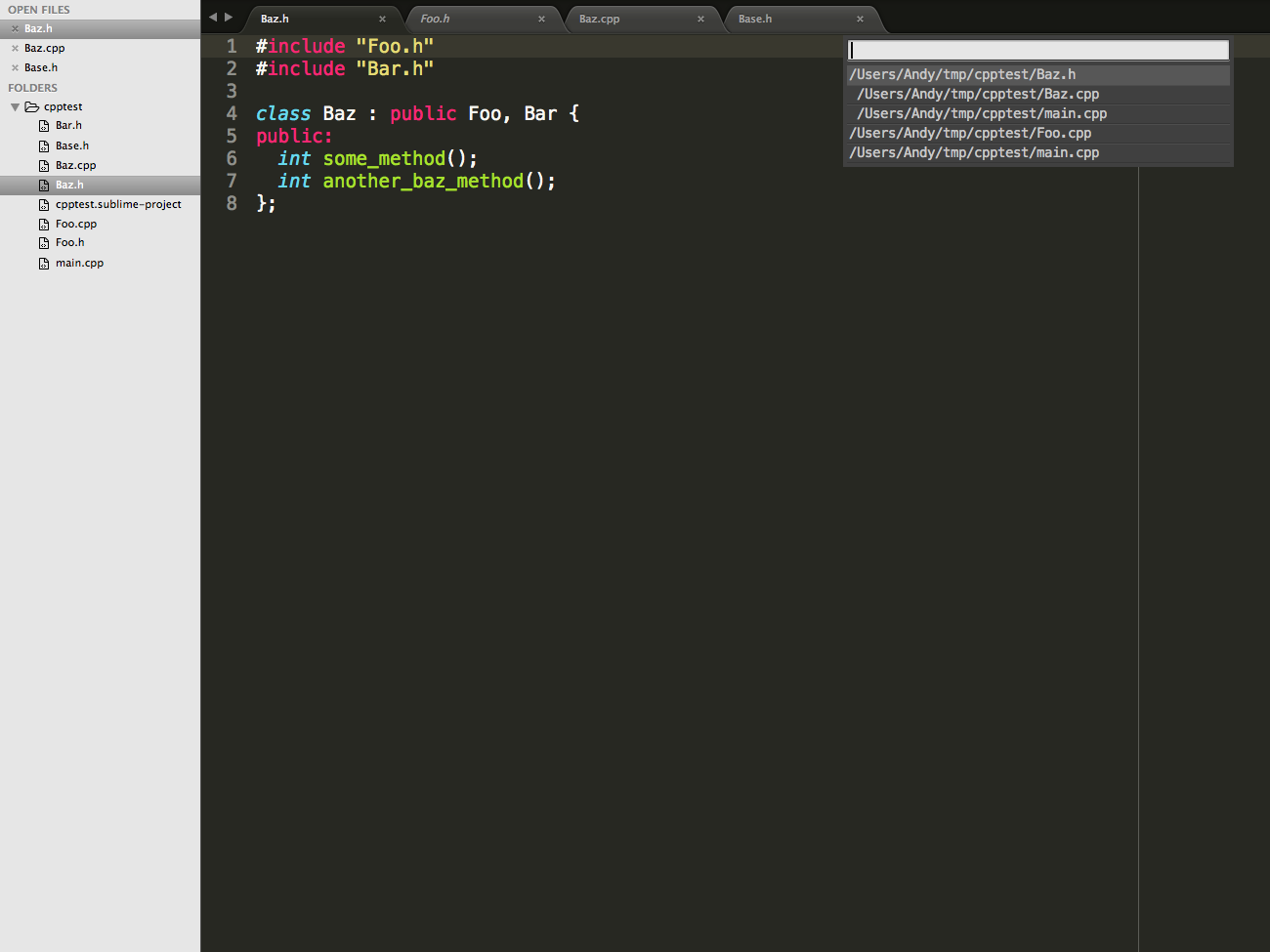 If the enable_diagnostics option is set to true in the .sublime-project file, Ceer will display the same errors and warnings as the compiler. Moving the cursor to anywhere in the diagnostic will display a summary in the Sublime status bar at the bottom of the window. A list of all commands in the project or a single file can be viewed in a menu using the View Issues in Project or View Issues in File commands, respectively.

a_private_field is declared to be private in Foo.h. Attempting to access it in Baz results in the error 'a_private_field' is a private member of 'Foo'. 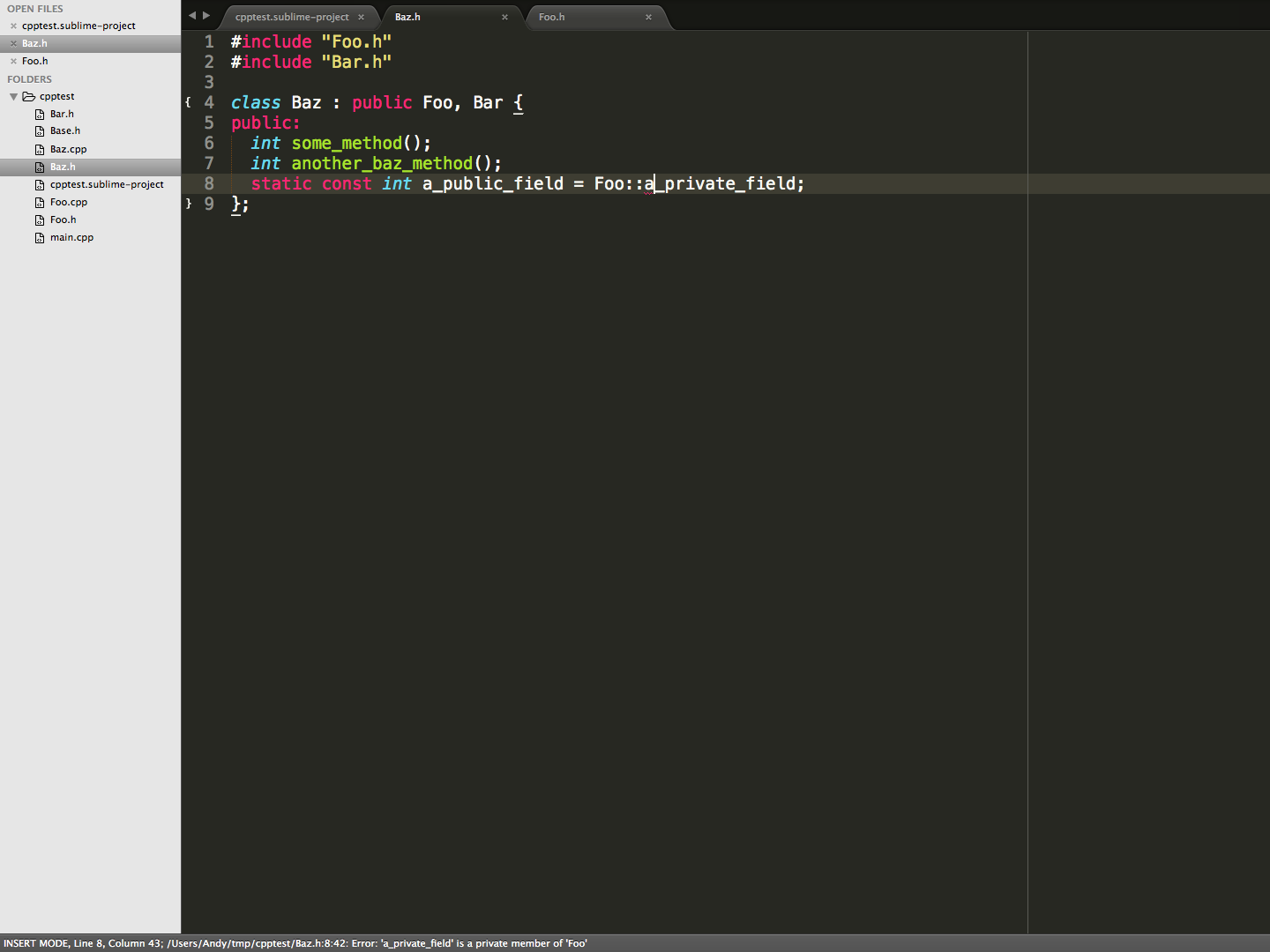 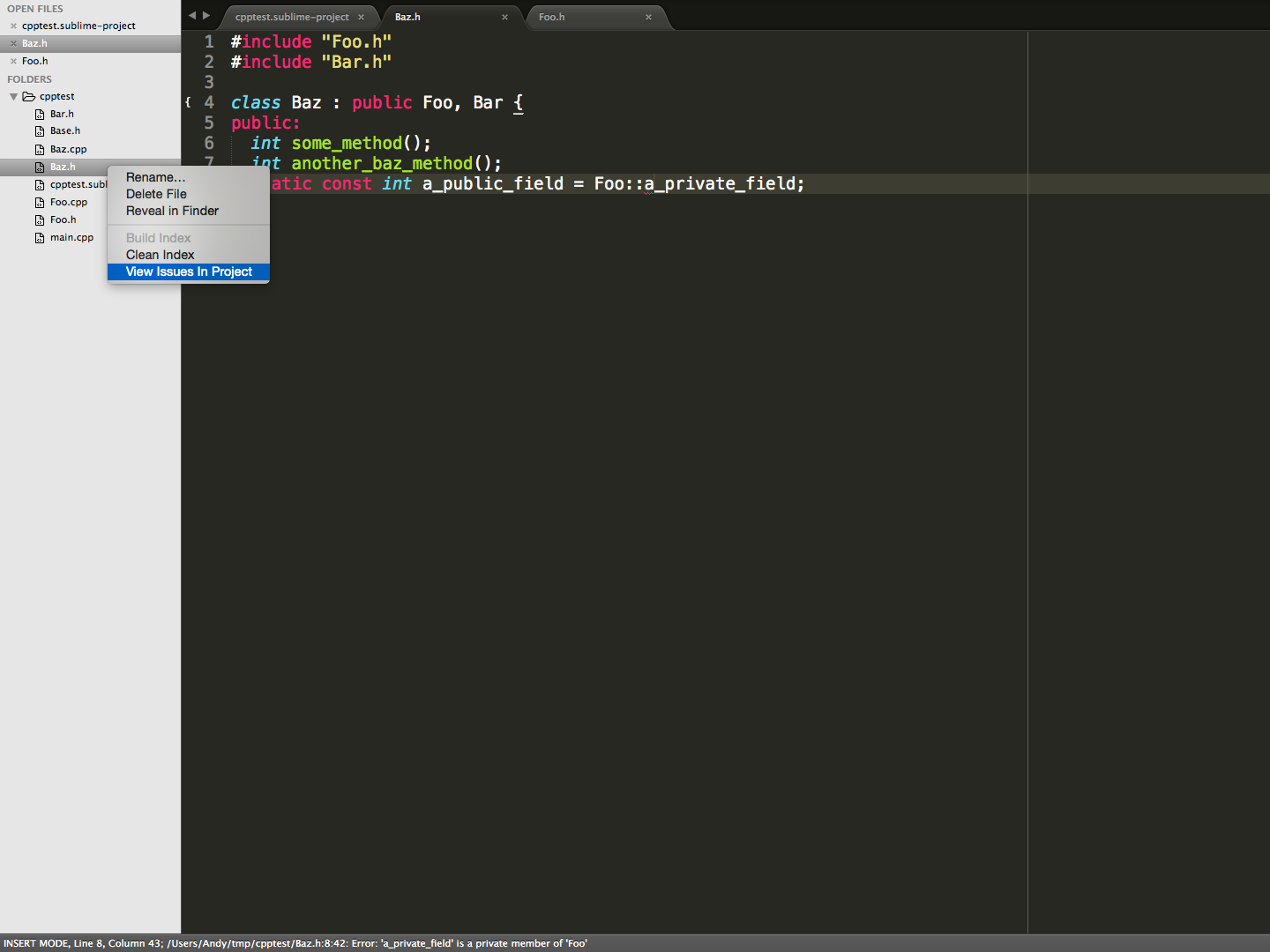 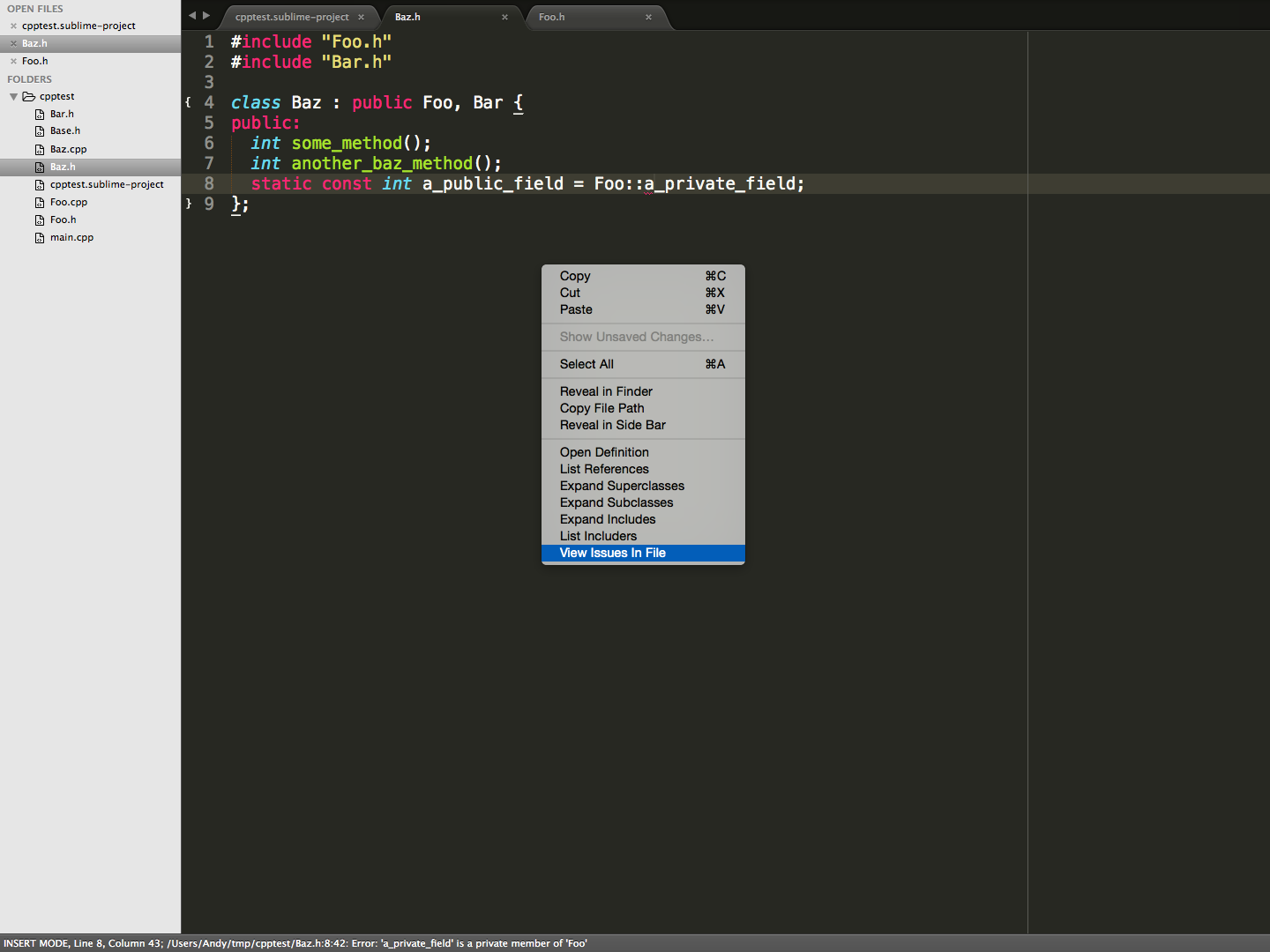 Selecting an error in the menu will jump to the error.

Currently Ceer is in a prototype phase, and is only available for OSX. Support for other platforms is planned.

Ceer is available in Package Control.

Currently, the only way to install is by directly cloning the Ceer repo into ~/Library/Application Support/Sublime Text 3/Packages: In order to produce the most faithful representation of the source code, Ceer can parse a CMakeLists.txt or Makefile and use the same compilation commands. To enable this feature, in the .sublime-project file , under the ceer section, set either cmakelists_path or makefile_path. Note that the 'ceer' section is created automatically on the first call to Build Index

Diagnostics can be controlled using diagnostics_enabled in the ceer section of the .sublime-project file.

Ceer is currently in a prototype phase, and we are working hard to improve stability, scalability, and portability. Issues and Pull Requests are greatly appreciated! Please read over the Contribution Guidelines to get started.