The official Sublime Text 3 package for the Rust Programming Language

This is a Sublime Text 3 package which supports Rust starting with version 1.0, it makes no attempt at supporting earlier incompatible versions.

This package used to be called 'Rust', but as of version 3, Sublime now comes with Rust built-in. The built-in version on Sublime is actually just a snapshot of this package with some fixes from quite some time ago. This package is still active and will continue to update and release, so if you want up to date features, and extra tools (such as syntax checking or building) we recommend using this package. Installing Rust Enhanced will automatically disable the built-in “Rust” package. If you receive any error, verify that “Rust Enhanced” is enabled, and that the current view's syntax is set to “Rust Enhanced”. There is currently no plan to push upstream changes back into the Sublime Core Packages repo, and extra features will stay here.

For syntax highlighting for Cargo files. Its recommended installing this with the TOML package.

Install the Package Control package if you haven't got it yet. Package Control is the best way to install packages for Sublime Text. See http://wbond.net/sublime_packages/package_control/installation for instructions.

Open the palette (control+shift+P or command+shift+P) in Sublime Text and select Package Control: Install Package and then select Rust Enhanced from the list. That's it. If you can't see Rust Enhanced its most likely because you're using Sublime Text 2.

Rust Enhanced has a custom build system tailored for running Cargo. It will display errors and warnings in line using Sublime's phantoms (see Messages for settings to control how messages are displayed). It also supports a variety of configuration options to control how Cargo is run. 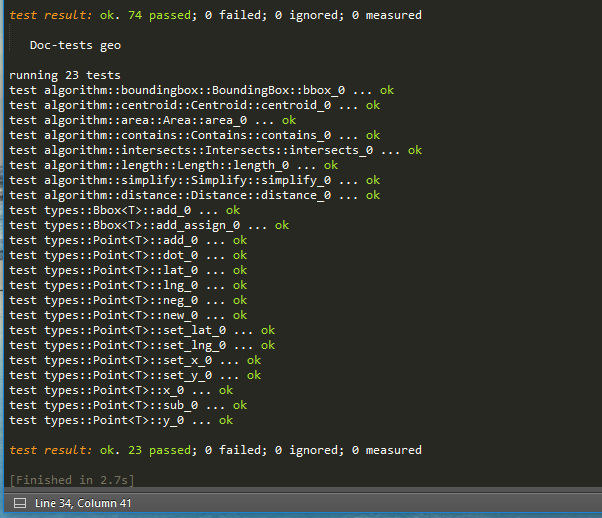 Rust Enhanced will automatically perform syntax checking each time you save a file. Errors and warnings are displayed in line the same way as the build system. This relies on Cargo and Rust (>= 1.8.0) being installed and on your system path. Plus Sublime Text >= 3118.

The available checking methods are:

This will use the same configuration options as the “Check” and “Clippy” build variants (for example, extra environment variables, or checking with different features). See the build docs for more information.

Projects with multiple build targets are supported too (–lib, –bin, –example, etc.). If a cargo project has several build targets, it will attempt to automatically detect the correct target. In some rare cases, you may need to manually specify which target a file belongs to. This can be done by adding a “projects” setting in Rust.sublime-settings with the following format:

RLS is being replaced by rust-analyzer, but may provide better support at this time depending on your needs.

To use one of the language servers, you need to install the Sublime LSP plugin. With both the plugin and one of the above servers installed, you should be able to follow the LSP docs for how to configure the server. Generally this involves running either the LSP: Enable Language Server Globally or LSP: Enable Language Server in Project and then selecting either rls or rust-analyzer. Depending on the size of your project, it may take some time for it to process and index.

Note that as well as error checking, code-completion, and renaming, RLS can run rustfmt on your code: right-click, and select LSP > Format Document or Format Selection in a Rust source file.

To customize the settings, use the command from the Sublime menu:

Additionally, you can customize settings per-project by adding settings to your .sublime-project file under the "settings" key.

Development is quite simple, just check out this project to your Sublime Text 3 packages folder, and switch to using this one. Syntax definitions are defined in the RustEnhanced.sublime-syntax file.

Created 2012 by Daniel Patterson, as a near complete from scratch rewrite of a package by Felix Martini.

This project is currently maintained by Jason Williams