Although SPARC is fairly uncommon in practice, it is still used as a teaching language in some universities. Writing SPARC without syntax highlighting is a horror that no mortal need endure.

Hilariously, my SPARC class was the final SPARC course my university offered before switching to x86. I hope that other students find this more useful than my classmates will.

The easiest way to install the SPARC Assembly package is via Will Bond's Package Control plugin. Install it, restart Sublime Text, and type:

Then restart Sublime Text again, and you're done! Revel in the awesome power of syntax highlighting!

If you'd rather install via Git, navigate to your Sublime Text 2 Packages directory in your terminal…

…and paste (try middle click if you don't know the shortcut) the command:

To install manually, download this archive into a folder called SPARC in your Sublime Text 2 Packages directory (Preferences -> Browse Packages...).

Make sure to restart Sublime Text 2 when you're finished.

Setting SPARC as the default language

Other languages include the SPARC file extensions, .s and .m, in their syntax definitions (R and Objective-C, respectively). To combat this, I've included a sparc.sublime-settings file which should change the auto-syntax preference to SPARC. If I have failed, then you may make the change manually by opening an .s or .m file and clicking View -> Syntax -> Open all with current extension as... -> SPARC.

The syntax highlighting should be mostly straightforward, but I'd like to point out an important distinction between certain opcodes: those opcodes that involve a delay slot—branching commands, jumping, and subroutine calls—are colored differently than those that do not. The complete list is located in sparc.JSON-tmLanguage, under constant.other.sparc. nop will also have its own color, as I decided that nop should stand out when it is used.

Regular machine registers (%r0-31, %i0-7, %o0-7, %l0-7, %g0-7) all have their own colorations that differ from the strange and mysterious %lo, %hi, %fp, and %sp. Everything else following a % symbol (e.g. macro- defined registers such as %my_register from define(my_register, l0)) has a distinctive color. Monokai does not color variables.

The SPARC package provides 7 snippets for super simple insertion of certain code structures. They are listed below.

subr inserts a basic non-leaf subroutine that has its own register window.

while you wait, while expands into a simple while loop structure!

for your convenience, for is like while, but with an iterator register already included.

arr provides access (either for a ld or a st) to an element in a single dimensional array, as long as the address of the beginning of the array is already known.

arr2d might seem complicated, but it's just the same as arr except that it works with a two-dimensional array instead.

if you want a conditional block, use if. Feel free to remove the “else” section (if_not_condition: ...) if you don't need an else.

Every shot features the beautiful and amazing (and free!) Adobe Source Code Pro Light. It works wonders on zoomed-in displays. 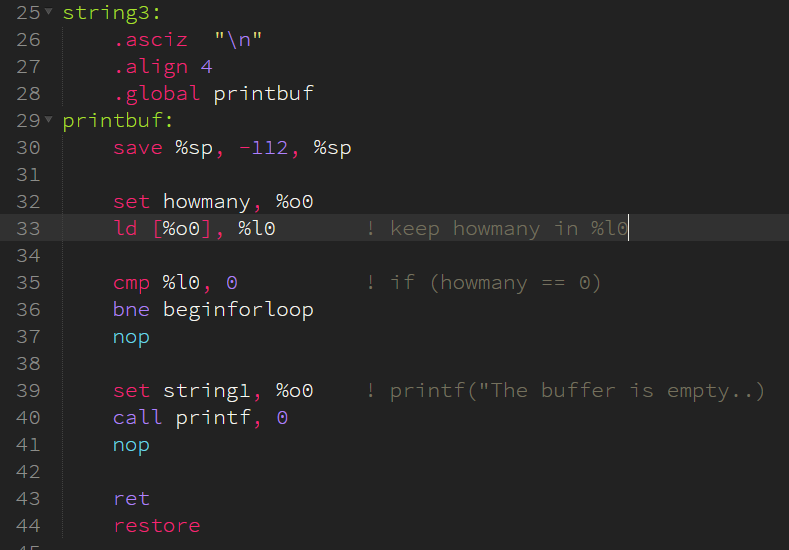 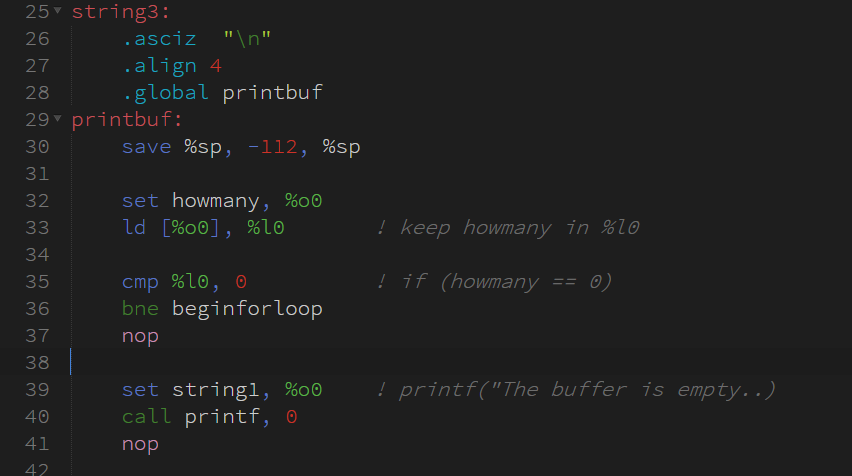 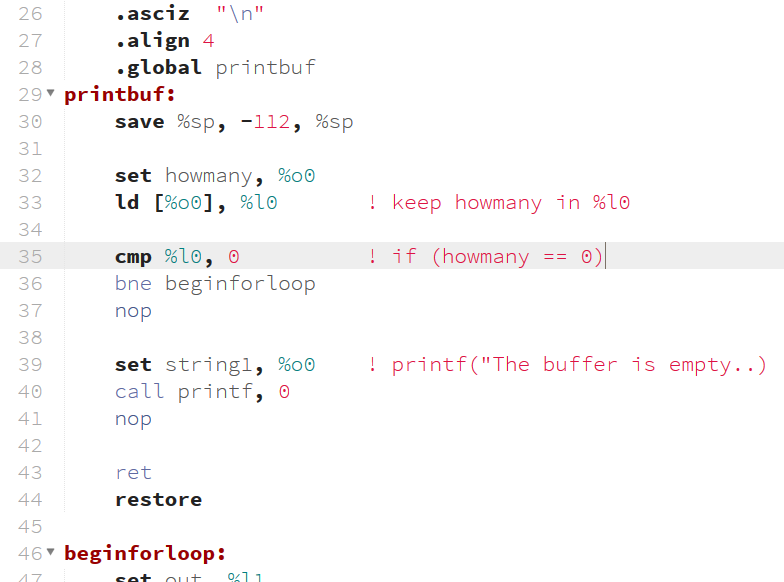