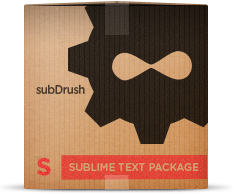 This is plugin for Sublime Text 3 (ST3) that exposes a subset of Drush functionality to facilitate Drupal development.

This is not an attempt to bring the entirety of Drush into Sublime Text. Instead the idea is that there are some commands that can be executed easily from within ST, such as clearing caches, getting values of variables, enabling or disabling modules and themes, etc. Such commands typically don't require numerous options and usually do not require additional user input to run. These kinds of commands will be added to subDrush - for other Drush commands, use your terminal.

See the issue queue for commands that are in progress.

This plugin works best when you have a Drupal directory open in ST3, or a directory immediately below your Drupal root. This allows subDrush to know about the local Drupal environment, and lets you interact with the local Drupal site's database.

For example, suppose your site directory structure looks like this:

In Sublime Text 3, if you go to File -> Open and open up /path/to/repo or /path/to/repo/docroot this plugin will work fine, and will be able to accurately identify the Drupal root to pass to Drush.

If you want, you can also open a single file in ST3 (for example, /path/to/repo/docroot/modules/color/color.module), and subDrush will identify the Drupal root by using the drush dd command.

Feel free to create your own key bindings as none are provided by this plugin.

The latest stable release of Drush comes bundled with this plugin. By default, subDrush will use its own bundled version of Drush. However, if you prefer to use another version of Drush (for example, if you are developing with Drupal 8 and need Drush 7), then check out Preferences > Package Settings > subDrush > Settings - Default for instructions on how to use an alternate version of Drush. Drush 5 is not supported.

Some commands don't work consistently with Drupal 6 (for example, php-script and php-eval). All commands are tested against Drupal 7.

Use Sublime Package Control and search for subDrush. Alternatively, clone this repository into the Packages directory - see the Sublime Text 3 docs for more information.

This plugin was written and is maintained by Kosta Harlan with support from DesignHammer Media Group.

A Sublime Text 3 Plugin that integrates with Drush

This program is free software: you can redistribute it and/or modify it under the terms of the GNU General Public License as published by the Free Software Foundation, either version 3 of the License, or (at your option) any later version.

This program is distributed in the hope that it will be useful, but WITHOUT ANY WARRANTY; without even the implied warranty of MERCHANTABILITY or FITNESS FOR A PARTICULAR PURPOSE. See the GNU General Public License for more details.

You should have received a copy of the GNU General Public License along with this program. If not, see http://www.gnu.org/licenses/.