LuaExtended is a syntax definition and snippet package for Sublime Text 3.

As of right now, LuaExtended contains the following improvements over the default Lua package:

You can now use Package Control to install LuaExtended. Simply type “install” in the Command Palette (Ctrl + Shift + P) to find the Package Control: Install Package command. Wait for the repository lists to load

and search for 'LuaExtended'. Alternatively, you can clone this repository into your Data/User folder (either in the install directory, in %appdata%/Sublime Text 3 on Windoze, or wherever else other environments put it).

If you are using a SublimeLinter3-based linter such as SublimeLinter-lua, you will need to modify your settings to get LuaExtended linting to work. 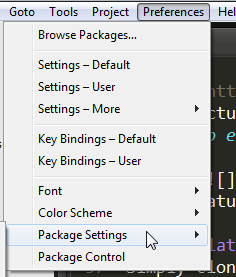 Find SublimeLinter in the list and open its “Settings - User”

The settings file is of the JSON format, so look for the line that says "syntax_map": {

You will need to add a binding that tells SublimeLinter to lint LuaExtended just like Lua. This is done by adding a line that says "luaextended": "lua",. Don't worry about the alphabetical order of the entries, SublimeLinter will sort them on next reload.

And there you go! Try opening a *.luae, *.ext.lua or *.extended.lua file and see whether linting works. If it for some reason doesn't work, read the tutorial again and check that you've followed it to the point. Try restarting Sublime before opening an issue!